Australia completed the Paralympic Games in Japan with 80 medals across 10 different sports, finishing with 21 gold, 29 silver and 30 bronze. 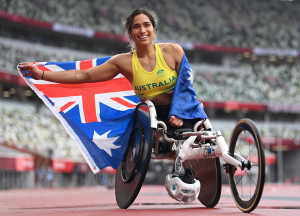 Australian Sports Commission Chair Josephine Sukkar AM, congratulating Australia’s Paralympic team on a triumphant Tokyo Games said that the toughest of Paralympic preparations has provided us with the most inspiring of human performances.

Ms Sukkar commended the team on its podium success, but said the inspiring two weeks in Tokyo had far transcended just medals alone.

“Our Paralympians are no strangers to adversity, but the preparations to get to these Games were like nothing we’ve ever seen before. In the face of these challenges, our Paralympians haven’t just settled for getting to the start line in Tokyo, they have excelled and inspired all Australians with their performances, humility, humanity and good sportsmanship.

“Their joy in competing was matched by the joy we felt watching at home. They have flown the flag for Australia as incredible ambassadors for our country and they have again raised global awareness about the astonishing abilities that people with disabilities possess.

“They have made all of Australia proud. There will be Australian children with disabilities who watched these athletes compete in Tokyo and will be dreaming of being a Paralympian themselves one day, perhaps at a home Games in Brisbane in 2032.

“Despite the many challenges faced in making it to these Games, our Australian Paralympians have brought the nation together and inspired the next generation of athletes.”

The AIS, through the Australian Government, is the largest funder of Paralympic sport in Australia, with investment in Paralympic sport increasing by more than 40 per cent in the last decade. AIS CEO Peter Conde said he is proud the organisation has funding equality in grants for Paralympic and Olympic athletes.

“The focus of the AIS is to consistently support Australian athletes in multiple ways to help them achieve the medal winning performances we saw in Tokyo.”

“The AIS directly provides $14m every year in direct athlete grants – known as dAIS. A total of 86 per cent of athletes in the Australian Paralympic team at Tokyo received dAIS during the extended five-year build-up to these Tokyo Games, as did almost 70 per cent of the Olympic team.

“The support of the AIS goes beyond funding and is represented through the incredible innovation and technology we have seen helping our athletes compete in Tokyo, the AIS Tokyo Heat Program, which has helped athletes recover and perform in the conditions in Japan, and through the continued support offered by the AIS Mental Health Referral Network.

“On behalf of the AIS, I would like to thank the Australian Government for their ongoing support and for the decision last week to provide medal bonuses for our Paralympians.”

The Games in Tokyo are the first since the AIS and all state and territory sporting bodies came together to sign the National High Performance Strategy in 2018, with the initiative aimed at strengthening collaborative partnerships across the high performance sporting sector and providing a collective vision for sport in Australia.

“The excellent results we have seen at both the Paralympic and Olympic Games in Tokyo are a testament to the teamwork and dedication within the high performance sport sector in Australia.

“A Games period provides a great reference point for whether we’re on the right track. We should be proud of the progress that’s been made in recent years, and I congratulate all our partners in the National Institute Network and National Sporting Organisations, along with Paralympics Australia for their hard work and contribution to the success of these Games.

“I would particularly like to congratulate Paralympics Australia Chef de Mission Kate McLoughlin and Chief Executive Lynne Anderson. Your work to help make these Games a reality and support these performances has been extraordinary.”