On the back of Heart Week, the ongoing threat of Heart Attacks (the biggest killer of Australians) and the tragic loss of Shane Warne recently, more and more big names in sport have gotten their hearts checked. 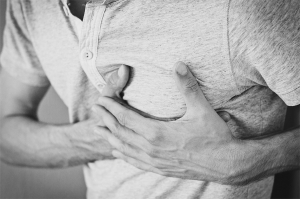 Great as they are, and giving us insight into a plethora of information, statistics also drive home hard realities – like it or not. When it comes to the biggest threat to the Australian population, statistics are equally as scary as they are at motivating us to take action.

For NRL legend and former captain of the Rabbitohs and Sydney Roosters, and a regular guest on The Footy Show, Sean ‘Garlo’ Garlick, that is precisely what has happened to him.

Heart attack kills more Australians than Covid, alcohol, and traffic accidents put together, and more than all cancers combined, so it is serious enough to be taken seriously. But, we are not real hot on early detection and testing. In fact, twenty percent of the population will face a heart attack, that is around 55 000 people a year, that’s around 72 people a day with almost 40 of these dying – every day.

Sean Garlick, who now runs the family business Garlo’s Pies since his retirement from the sport said:

“I mean, I knew things were bad, but not as bad as I have learned since Shane Warne succumbed to a heart attack. I am the same age and it sure rattled me to take action.”

“I went and had my heart checked out, and looked at ways to improve my lifestyle and reduce risk factors, but the biggest thing of all was to get a 3D Heart Scan. It let me know immediately if I needed intervention or if my ticker was in good shape,”

In an attempt to reduce these shocking statistics and save lives, Sean Garlick has stepped up to call upon every Australian male aged 45+ and woman 55+ to get tested. Under the call-to-action slogan #Dontbeastatistic Sean ‘Garlo’ hopes to inspire more people, especially men, to be proactive and get their hearts checked.

“I have been guilty of that myself too, thinking ‘she’ll be right mate’ and carry on. But there are too many Aussies, everyday people, men and women, leaders and sports legends alike who get knocked down with a heart attack with the chance for survival stacked against them. I mean, who would want to take the gamble?”

“We have to shift from a tow-truck approach to a preventative one. Heart attack has been and remains the biggest killer of Australians. These are fathers, mothers, brothers, sisters, managers, leaders, frontline workers, and everyday people who will be dearly missed.”

“Crazy thing is, we do have the technology to literally see inside people’s hearts yet we are not broadly using it to establish risk factors or be able to implement the timely intervention. We are a decade behind the USA and Europe, yet we have the technology, and it is affordable too.”

We spend millions on early detection and testing for cancer such as bowel cancer tests shipped to every Australian at age 50, and mammograms for women, yet heart attack kills far more people. We don’t test for heart health or use the 3D Imaging technology enough to assess the condition of an individual’s heart.

The Healthy Heart Network has set up a free Virtual Heart Scan which can be taken online and establishes which risk group people belong to. From there those in the intermediate and high-risk groups take the 3D Heart Imaging Scan which can show cardiologists any calcification or narrowing of the arteries that may be present. The 3D Imaging costs under $300 and is a small investment for peace of mind around your own heart health.

“I was identified in the intermediate-risk group and I had the 3D scan. The result was, I am fine, but I could have just as easily not been. I want to encourage people to take action and get tested.”

“We are all likely to know of someone who has had a heart attack. Most, unfortunately, die. Almost twenty people a day, that means it could be one of your colleagues, mates or family members. That’s scary – really scary.”

According to Dr. Bishop, while we have been seeing increasing numbers of people taking the Virtual Heart Scan and 3D Imaging, it is by far not enough to curb the epidemic numbers of heart attacks in the country. Readers can access the free online test at www.virtualheartscan.com.au or learn more about heart attack prevention at www.whatsmyheartattackrisk.com.au Ultimately, it is up to each of us to get our hearts tested, our life literally depends on it.

Important Information for Council Facilities in the Lead Up to the End of the...