FitazFK entrepreneurs hit the gym to cash in on social media success. 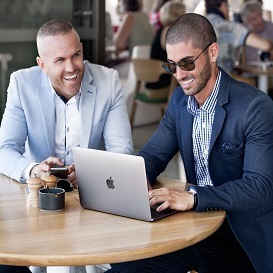 After repaying the initial start up costs of their e-commerce business within the first two days of trading, the founders of FitazFK are muscling their way into the Brisbane gym market.

The latest venture for founders Georgio Batsinilas (pictured right) and Aaron McAllister (left) is a 650 square metre gym facility in Brisbane’s inner city suburb of Kangaroo Point is set to become one of the most prominent gyms in Brisbane.

“Leveraging off our success with the online FitazFK market, we’ve been working on creating the ultimate gym experience at our new FitazFk gym,” says co-founder Batsinilas.

The fit-founders, with an Instagram following of more than 700,000, are confident their latest move will pay off with 250 people piling onto the waiting list within their first two weeks of advertising.

“We’ve got around 300 people on a pre registration list now which we are working through, and we’ve signed up our first 100 founding members already,” says Batsinilas.

The odds of success are in the duo’s favour if previous records are anything to go by having sold more than 50,000 fitness and nutrition guides online and transforming over 38,500 bodies.

“Initially, FitazFK repaid its capital investment within two days and the growth since then has allowed us to not only invest in the gym but also into Ryan Greasley Fitness which paid for itself in just 10 hours of going live,” says Batsinilas.

A major factor in the Brisbane boys success story has come from the unique username @FitazFk which grew to 50,000 followers in just four months and a savvy social media marketing strategy.

“If you want to be successful in social media marketing you really need to live it and breathe it. I became obsessed! I read lots of books, attended seminars and even joined mastermind groups who really understand the power of social media and we share our knowledge. In the process, I also learned a lot from my fiancé, Thessy. She is literally the QUEEN of social media! Her skill to understand the psychographics of her customers is next level. “If we only cared about likes and based our success of followers we would probably not make much money but would have double the engagement and double the followers.”

In addition to attracting the right followers, Batsinilas says it is important to build honest and loyal relationships with key influencers.

“We are in the golden age of influencer marketing – it’s not going anywhere anytime soon.”

While preparations are underway for the gym to be up and running by the end of October, the entrepreneurs are also planning a trip to China to take their manufacturing side of the business to the next level.

1. Spend time learning what other successful brands are doing.

2. Our social media page is kept to a theme. My theme is built around people coming to our page for aspiration in the fitness space – we want to inspire our customers to be their best version of themselves!

3. I always post clear images and always make sure I credit everyone I feature.

4. Network! This is something a lot of people miss. Instagram is more than just posting an image. It’s about interacting with other brands/pages. You have to collaborate with other pages that are likeminded to yours to gain new followers and get exposure.

6. I also made sure I knew every algorithm that was out there at the time and that it was most influential. If Instagram were favouring pages that received heaps of interaction from big pages, I would negotiate with these “bigger accounts” so they would like my posts.

Tip: today, Instagram is favouring stories, get onto this ASAP; in a month it will be something different.

7. Respond to everyone in comments, DMs, mentions – the lot. You are never too big, and no one is ever too small. That’s what is going to differentiate you from being just another brand. You’re becoming the customer’s friend.