Grassroots sporting clubs are a vital part of local communities, allowing people to share in a passion for their chosen sport and connect with others. 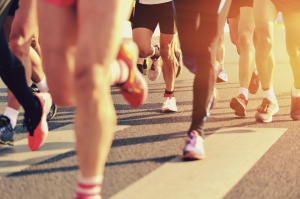 With current coronavirus restrictions impacting the ability to train, participate or play in large groups, one of the many challenges for local clubs is keeping participants engaged and physically active, while also retaining a sense of community and togetherness.

The Warrnambool Athletics Club has adapted their running events during the pandemic, and even managed to attract new participants to the club. So, how did they go about it?

Ashley Ansell, President of the Warrnambool Athletics Club, knew that when current coronavirus restrictions came into effect events wouldn’t be able to be run as usual. So, the committee decided to host virtual races instead.

The route for each virtual running race is plotted in advance and participants are then given the chance to go out and run the course at a time which suits them. Runners need to record their time and then post it on the club’s Facebook page before the cut-off date of that event.

“We’ve had to evolve really and take it as a day-by-day basis.”

The club has completed three virtual races, the first event was a 6km time trial, followed by 2 handicap events, where quicker runners are put at a slight disadvantage to slower runners to close the gap between the first and last runner’s time.

“We have a mix of time trial and handicap events which means that any person who chooses to run in any event will have a chance of winning regardless of whether you’re a fast or slow runner.”

“It’s been really well supported by our members.”

Growing the sport in isolation

Existing club members aren’t the only ones embracing the virtual events. New participants to the sport have also got involved.

“The first event was probably more directed to existing members because we wanted to continue to support them, but there was also a sense this was an opportunity to encourage anyone to participate, especially when a lot of other activities have had to cease.”

“The club has actually gained 8 new members and a new sponsor, so it’s been really pleasing to see the club supported in such a way and recognised by the wider community.”

With events now being held virtually, the flexibility of participation has also increased.

“It’s not just one day in the calendar where we’re asking people to run. With our virtual series we’re generally giving participants anywhere from 1 to 2 weeks to complete a set course. For that reason, we’d like to think we can incorporate these kinds of events into our normal running program going forward.”

“The more people we can attract to the sport and the club is definitely a positive. What this COVID-19 time has taught us is you have to be innovative and running is probably a sport which has really benefited.”

With all sorts of useful technology available to help, now is an opportunity for organisations to innovate to help members stay physically active while still fostering the sense of community so often found in local sports clubs.

To find out more about how Warrnambool Athletics Club has adapted during the pandemic, you can watch an interview with Ashley Ansell and South West Sport here.

Tips for engaging participants at a local sports club

1.     Embrace the technology available such as mobile apps to set up running or workout groups

2.     Entertain new ideas which might appeal to new members or people beginning in the sport

3.     Allow participants to be flexible in the time they have to complete organised activities or events