Hemp seeds are superstar seeds that have a real nutrition benefit in the form of plant omega-3. 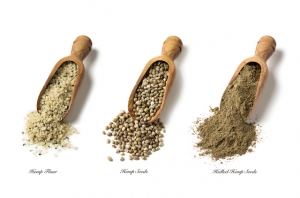 These days you can find hemp everywhere in the supermarket. There are hemp flakes/hearts, hemp oil, hemp protein and hemp flour. To mention just a few. I was recently asked to comment on the nutritional value of hemp (it’s pretty impressive), given this huge rise in popularity. Here are the 4 nutrition bonuses you get from adding hemp to your meals:

Because of its amino acid profile together with being a good source of plant omega-3, hemp is a very useful addition to vegan and vegetarian diets.

What is low-THC hemp?

In 2017, this hemp was approved for use as a food in Australia although it’s been for sale for years in the US and EU.

THC stands for TetraHydroCannabinol which is the psycho-active ingredient of marijuana.

Hemp is a distinct variety of the plant species Cannabis sativa L. It is NOT marijuana and has low levels of THC (won’t make you high). Low-THC hemp or industrial hemp is the term usually used for this type of hemp, which comprises the whole seeds as they come from the plant.

The authorities had to get right the marketing and labelling issues, legal implications, maximum levels of the hallucinogenic THC, and potential problems for roadside drug testing. Now you’ll see low-THC hemp for sale in the form of whole hemp seeds, hemp flakes, hemp oil, hemp protein (the part leftover after the oil is extracted) and hemp flour (ground hempseeds). Where once they had to be labelled as ‘not for internal consumption’ or sold as a skin ‘moisturiser’, they now enjoy wider appeal.

The nutritional value of hemp is significant.

Hemp seed oil is 100 per cent total fat and is extracted from the seeds. Hemp Foods Australia tell me they cold-press it mechanically using no heat or solvent, so expect it to have a stronger greenish look and flavour.

Of that total, hemp seed oil contains around 75 per cent polyunsaturated fats. It is particularly rich in the omega-6 fatty acid linoleic acid (LA) and an omega-3 fatty acid ALA. Plus a bonus of gamma-linoleic acid (GLA), usually found only in evening primrose oil or borage seed oil.

Most interestingly, the omega-6s and omega-3s are present in the ratio of 2:1 to 3:1, which is thought to be around the ideal ratio for good health.

I see it as an easy way for vegans to get their recommended intake. One tablespoon of hemp seed oil gives you 3 grams or 3,000 mg of ALA, which represents 300 per cent of the suggested day’s intake of 1,000mg.

For comparison, linseeds (flax seeds) are also a popular source of omega-3 acids. They too contain a lot of chlorophyll so can look quite greenish if unrefined. Due to its high ALA, the linseed oil is unstable and oxidises quickly (goes rancid). To slow this down, it’s always been suggested to store in the fridge in dark glass, something I too suggest for hemp oil.

Industry Calls for Urgent Reclassification in Victoria Ahead of Stage 3 Res...
Scroll to top