A new study has demonstrated a relationship between more strenuous physical activity and greater relief from symptoms of chronic anxiety. 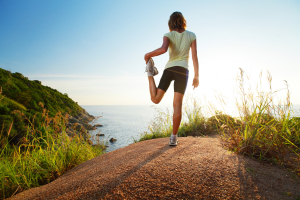 Studies continue to uncover the ways different forms of exercise can be advantageous for our mental health, and a new study has drilled into how chronic anxiety might best be treated through such interventions. The authors have uncovered a relationship between the intensity of physical activity and relief from symptoms of anxiety, with those working up the most sweat found to benefit the most.

The research was led by scientists at the University of Gothenburg and was intended to fill a gap in what we know about physical exercise and mental health. Studies have established links between exercise and reduced risk of depression, but the scientists say the connection with relief from anxiety is less clear. So they drew up a study involving 286 patients diagnosed with an anxiety disorder, constituting what they describe as one of the largest studies of its kind to date.

These subjects were divided into groups to undertake different exercise regimes across a 12-week period, defined as either moderate or strenuous. Both groups participated in 60-minute training sessions three times each week involving warmups, 45 minutes of combined aerobic and strength training, followed by cool downs and stretching.

Most of the subjects across both groups went from baseline levels of moderate to high anxiety, to a low level of anxiety once the 12-week exercise program had wrapped up. But the difference between the two was profound. The scientists observed that chances of improvement in anxiety symptoms among those in the moderate program rose by a factor of 3.62 compared to a control group. For those in the strenuous group, this factor increased to 4.88.

“There was a significant intensity trend for improvement – that is, the more intensely they exercised, the more their anxiety symptoms improved.”

Findings such as these drive home the benefits of maintaining an active lifestyle when it comes to managing conditions like anxiety, and also demonstrate how it advantages those with chronic forms of the condition and don’t respond to standard treatments, like medication and cognitive behavioral therapy. In this way, the study shows how exercise programs tailored to individual circumstances, possibly designed around heart rate and physical exertion, could offer specialised new forms of therapy.

“Doctors in primary care need treatments that are individualised, have few side effects, and are easy to prescribe. The model involving 12 weeks of physical training, regardless of intensity, represents an effective treatment that should be made available in primary health care more often for people with anxiety issues.”

The research was published in the Journal of Affective Disorders.