Researchers at St Vincent’s Institute of Medical Research (SVI) in Melbourne are leading a clinical trial to test a treatment intended to stop the immune system from destroying the insulin-producing cells of people with newly diagnosed type 1 diabetes. 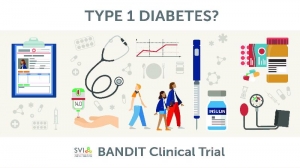 “When type 1 diabetes is first diagnosed there is a substantial number of insulin-producing cells still present. The BANDIT (baricitinib in new onset type 1 diabetes) Trial will help determine if the drug baricitinib, currently used to treat rheumatoid arthritis, will protect the insulin-producing cells from immune attack. This would allow people who have recently been diagnosed with the disease to continue to produce insulin for a longer period and improve their glucose control.”

People between 12-30 years old who have recently been diagnosed with type 1 diabetes are being sought to take part in the two-year trial.
People with type 1 diabetes are dependent on insulin injections to regulate their blood glucose levels. This has been the mainstay of treatment since insulin’s discovery almost 100 years ago; however, despite its life-saving role, long-term complications of the condition include heart attack, stroke, vision impairment, kidney disease and nerve damage.
Professor Tom Kay, Director of SVI, lead investigator of the BANDIT Trial and recipient of the 2020 Australian Diabetes Society (ADS) Kellion Award* said:

“It is tremendously exciting for us to be the first group anywhere in the world to test the efficacy of baricitinib as a potential type 1 diabetes treatment.”
“If the trial proves successful, production of insulin will be maintained and people with type 1 diabetes will be significantly less dependent on insulin treatment.”

“This is a fantastic opportunity for Australian research and an important step towards novel type 1 diabetes treatments.  We’re proud to be supporting a clinical trial that builds on many years of work led by the team at SVI – a demonstration of translational research in action.”

“This is a great opportunity for Australian researchers and trial participants. We will, for the first time, determine if this tablet can be used to treat type 1 diabetes.”

Libby Rose was 12 when she received her type 1 diabetes diagnosis. The impact, physically and emotionally, was immediate. “I was overwhelmed; I didn’t understand what was going on. And because of the stress, my sugar levels kept rising, which caused me to become sick again.”

Her mother, Tracy, was stressed too.

“I want my daughter and others to be able to live a carefree life, free of calculations, side effects, needles, pain, external pumps hidden inside pockets and the concern about long-term health issues. I really hope that this trial provides other families with an alternative treatment option for this disease.
“It’s too late for us to be a part of the trial, but if we could, we would certainly be interested to help make the lives of people who might be diagnosed with type 1 diabetes in the future look more ‘normal’.”

The BANDIT Trial will run at The Royal Melbourne Hospital, The Royal Children’s Hospital and St Vincent’s Hospital Melbourne. People with type 1 diabetes who have been diagnosed in the last 100 days, and are between the ages of 12-30, are eligible. More information at [www.svi.edu/bandit]www.svi.edu/bandit
About St Vincent’s Institute
St Vincent’s Institute of Medical Research (SVI) is a Melbourne-based, independent medical research institute that conducts biomedical research into the cause, prevention and treatment of high-impact diseases such as cancer, heart disease, diabetes, obesity, bone diseases and Alzheimer’s. SVI is affiliated with St Vincent’s Hospital Melbourne and the University of Melbourne. [www.svi.edu.au]www.svi.edu.au.
*The ADS Kellion Award is presented each year to an Australian who has demonstrated innovative leadership and has made an outstanding and highly original contribution to the advancement of knowledge in diabetes research, clinical or service areas in Australia.

Get Fit with HIIT in Time for Summer
Scroll to top