Launch of the first naturally sugar-free tonic in Australia. 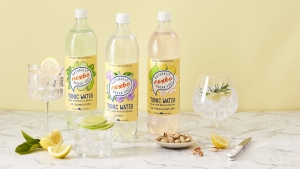 It’s a little-known fact that there’s more sugar in the average tonic water serve, than a full-fat soft drink but that’s the truth! In fact, there’s approximately 22 whole teaspoons of sugar in a 1L bottle of regular tonic water…

Today, Nexba, Australia’s leading Naturally Sugar Free drinks brand and one of the nation’s most celebrated start-up success stories is changing the game. Nexba has officially launched Australia’s only tonic water range that’s both sugar AND artificial sweetener free. Plus, it contains at least 95% Aussie ingredients!

The Aussie-made and owned Nexba was started by brother-in-law entrepreneurs Troy Douglas and Drew Bilbe in their early twenties and has built a cult-like following for its naturally sugar-free take on classic soft drinks, and first-to-market drinks innovations such as Probiotic Soda and Kombucha.

As sugar continues to be exposed as the major cause of obesity and diabetes related illness, it’s no wonder that the Bacardi 2020 Cocktail Trends Report revealed a whopping 62% of consumers are seeking natural beverage options as mixers.

The same report revealed that 40% of consumers are now actively looking for mixer options ‘without artificial additives’, which is no surprise as artificially-pumped ‘zero sugar’ or ‘diet’ drinks continue to be linked to alarming health impacts.

Nexba Tonic Waters are all about having the best of both worlds – epic taste but without the nasty side effects.

Should the Australian Fitness Sector be Regulated?
Scroll to top