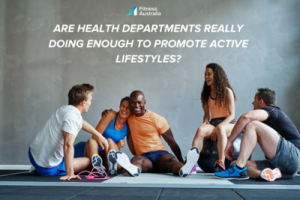 The pandemic has already taught us many lessons and it will continue to be an ongoing educational period for all Australians as we navigate a post-COVID world.

A key learning, and one well overdue, is the importance of exercise in combatting not just negative physical health outcomes but also our mental wellbeing. It has been both refreshing and reassuring to see and hear the Prime Minister, Federal Health Minister, all state premiers, chief health officers and their national counterparts extoling the benefits of maintaining, or beginning, some exercise as one of the four reasons to be outside during the various COVID lockdowns.

In fact, keeping healthy is not just vital for our mental health and wellbeing, it can help prevent fatal implications associated with COVID-19 as evidenced by recent data released by the World Obesity Federation showing of the 2.5 million COVID-19 deaths worldwide, 2.2 million were from countries with high levels of overweight people.

With Australia’s overweight and obesity levels increasing – ABS data* shows two-thirds of adults in nearly all states and territories are overweight or obese – the question is “Are health departments really doing enough to promote active lifestyles?”

In 1977 a successful Victorian campaign was adopted nationwide and the well-loved “Norm” entered our lounge rooms courtesy of television promoting all Australians to “Be in it today, live more of your life”. Four decades later the message, “Life. Be in it.”  is even more important than ever.

These figures are important in today’s context because in 2018 the Federal Government signed up to an international Global Action Plan for Physical Activity (GAPPA), whereby the government committed to having fifteen percent more Australians more active by 2030.

With 12.5 million Australian adults already overweight or obese*, if the Federal Government is serious about its GAPPA commitment, promoting active lifestyles and the importance of maintaining regular exercise needs to be the responsibility of Health Departments – both at a Federal and State level.

It’s also important to understand that exercise takes many forms from simply walking to work or walking the dog, to pruning the roses, to joining the local Park Run or Tai Chi group, through to joining a structured exercise program in the local park or neighbourhood gym.

A reality well recognised by all stakeholders, and backed by a myriad of research, are the demonstrable improved community health outcomes through exercise. Prime Minister John Howard appreciated the benefits of investing public funding for community good with the gun buyback program and as the Federal Government finalises its 21/22 Budget Policies surely it is time for Norm to also undergo a GAPPA inspired Lazarus with a triple bypass reinvention.

With increased community awareness of and participation in exercise generated through COVID, and the 2032 Olympics on the horizon, now is the time for the Federal Health Department to leverage this increased awareness and act on its GAPPA commitment.

Bringing a contemporary Norm back now is a strong preventative health investment and will generate considerable and ongoing cost savings to the taxpayer through an overall improvement in the community’s physical and mental wellbeing.

Come back Norm; we need you.