La Trobe sports injury researchers are working with the AFL, Medibank and other partners to reduce knee injury among female Australian football players, thanks to a grant from the National Health and Medical Research Council (NHMRC). 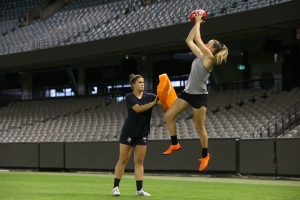 La Trobe’s Sport and Exercise Medicine Research Centre researchers, led by Professor Kay Crossley, have secured an NHMRC Partnership grant to work with the AFL and other partners to the evaluate the effectiveness of Prep-to-Play, a La Trobe-developed program aimed at curbing injury.

“A woman who has had an ACL injury is four to six times more at risk of osteoarthritis than an uninjured woman.”

“A woman with an ACL injury is twice as likely to require a knee joint replacement later in life and is one-and-a-half times more likely to develop chronic cardiovascular disease. These longer-term injuries or diseases can have lasting affects one physical and mental health. They also put a burden on our healthcare system.”

The NHMRC funding will enable Professor Crossley and her team to work with partners – the AFL, Medibank, the Australian Physiotherapy Association, the Australasian College of Sport and Exercise Physicians and Sports Medicine Australia – to evaluate Prep-to-Play’s uptake and effectiveness over two community football seasons (2021 and 2022) in Victoria.

Dr Linda Swan – Medibank’s Chief Medical Officer and executive lead of the Medibank Better Health Foundation – said research can be a catalyst for change in government policy and community practices. She said it’s up to coaches, parents and carers to ensure children and teenagers are warming up properly, to greatly reduce the risk of injury.

“A national injury prevention program like Prep-to-Play is science based and cost-effective for a club to implement. The education of coaches, players and parents is critical to ensure we do better in looking after the knees of our sporty young women.”

“Government health agencies and sporting bodies need to recognise the future health implications of ACL injuries for children and teenagers. We know women are worse off when it comes to ACL and other injuries than men in both AFL and soccer.”

La Trobe Deputy Vice-Chancellor for Research and Industry Engagement Professor Susan Dodds said the research funding is testament to the high-quality research La Trobe does in sport and exercise medicine.

“Preventing injuries from happening in the first instance is vital for the mental and physical welfare of our community and benefits our healthcare system. Providing a safer sporting environment will hopefully encourage more young women to participate in sports and exercise.”

“The AFL will continue to support research and implement best-practice injury prevention programs across all levels of women’s football. The AFL Female Football Prep to Play Program has been a terrific resource for football communities from the grassroots to the elite to implement in their training programs and we will continue to work with La Trobe University to research ways in which we can decrease the incidence and prevalence of knee injuries in women’s football.”

NHMRC Partnerships Projects help create partnerships among decision makers, policy makers, managers, clinicians, and researchers. This funding scheme provides funding and support to create new opportunities for researchers and policy makers to work together to define research questions and undertake research, and to interpret and implement the findings. Partnership Projects answer a specific research question to influence health and well-being through changes in the delivery, organisation, funding and access to health services.