Hot on the heels of StickXfit’s recent success in gaining global accreditation, this unique fitness training program is again making headlines with its most recent appointment of industry icon Linda Shelton to its Board of Directors. 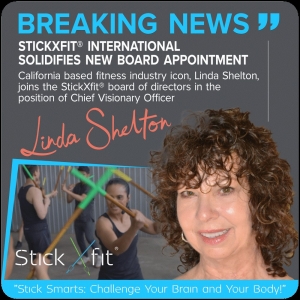 Linda Shelton is an internationally recognised fitness and wellness consultant, presenter, certified trainer, lecturer, author of major global fitness brands and award-winning video producer/director. Acclaimed as an industry leader for her leading-edge, scientifically applied programming with a B.A. in Physical Education and her master’s work in Exercise Physiology. Inducted into the US National Fitness Hall of Fame in March 2007, Shelton has spent the past five decades inspiring millions of people all over the globe to live a healthier lifestyle.

In 2019, California-based Shelton was originally introduced to StickXfit by Deborah Goldberg, a global fitness industry advocate and successful fitness tech entrepreneur, who had been helping develop StickXfit in Australia for months. Shelton ultimately then guided StickXfit through its educational development journey, which resulted in the program achieving global accreditation with seven different fitness associations and regulatory organisations in Australia (Fitness Australia & FITREC), New Zealand (REPS), Canada (CanFitPro) and the USA (AFAA, NASM and ACE).

“It’s not very often that a business or board finds an opportunity to align themselves with an individual who understands every facet of your business. Ms Shelton’s global fitness industry acumen, visionary approach to education, digital innovation and strategy execution capability not only enabled the StickXfit business to ‘think big’ in a blue-ocean fitness market but enabled us to meet the market where it needs to be met, which set the wheels in motion to develop an exciting new fitness product for StickXfit licensees. We are honoured to welcome Linda Shelton to the Board of Directors and look forward to our business journey ahead.”

“With both respect and excitement, I’m elated to join the StickXfit Board of Directors. In my career, there are only a few ‘standout companies’ I’ve worked with where I immediately can envision long-term, the multiple prongs of engagement and potential market launches. StickXfit is at the top of this list. I look forward to our collaborative work to springboard StickXfit’s growth and make major contributions within global fitness and wellness communities. StickXfit® is a unique new workout that uses double rattan sticks to provide a truly holistic exercise experience, including a key differentiator of partner and group tactile interaction. Inspired by Filipino Martial Arts, StickXfit draws from a variety of areas as a result of International Founder, Andy Elliott’s, diverse worldly education of combat/martial arts extensive instructor experiences and accredited academic certifications, which spans 40+ years.

“Very early on, I recognised the extensive health, cognitive and neurological benefits offered by this ancient martial art to the general population. This ‘lightbulb’ moment became the catalyst for my mission to create a smarter way to train for the general population, as well as specialised cohorts including kids, corporate wellness programs, active ageing adults, medical fitness and the mainstream fitness and millennial markets.”

StickXfit participants enjoy an evidence-based, full-body workout that connects both the brain and body via challenging hand-eye skills and drills promoting cognitive brain function. It’s developed using layers of integrated activities and techniques, all in a mixed, multi-modality, cardio-based format, and it’s this proprietary neural-targeted workout design that is a big part of what makes the StickXfit program so unique.

‘’We’ve placed instructors at the core of all decisions we made when we designed the learning ecosystem available to StickXfit instructors. Instructors will enjoy a user-friendly easily programmable application called STIC which ultimately underpins our entire education, class delivery and proprietary music content delivery system.’’

“StickXfit ticks off all my boxes when it comes to originality, smart, evidence-based programming which will make a massive imprint on how people train and the results they will achieve. I love that we created a program foundationally steeped in efficacy and applied science which can be explained by our Master Trainers to instructors to teach it yet understood by the consumer. StickXfit is more than just another fitness program to hit the market. The overriding differentiator is the cognitive application infused in the program.”

“StickXfit drills and skills are designed to simultaneously develop both brain and body conditioning; but most of the time class participants have so much fun they don’t even realise the high level of functional training they’re undertaking. The cognitive values that the StickXfit training methodology offers, is reflective of the future of exercise programming protocols.”

To see StickXfit in action watch the video at HERE

Instructors who’d like to become StickXfit-accredited or fitness businesses who are interested in offering this highly engaging program to members, can find out more by contacting Eugene Downing at ceo@stickxfit.com or visit www.stickxfit.com

All moves using rattan sticks as the tool for the entire workout. This neural-targeted workout design, along with the use of the sticks, is what differentiates StickXfit from any other fitness training program. We’ve put the Fun with StickXfit drills and skills back into Functional training. The proprietary StickXfit methodology is the future of contemporary exercise protocols, which targets training the brain as well as the body, to enhance both getting more physically strong, and brain healthy.