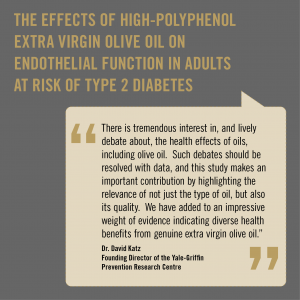 In this study, recently published in The International Journal of Cardiology, researchers compared consumption of high polyphenol extra virgin olive oil to refined olive oil on measures of cardiovascular health in a group of 20 adults with prediabetes.

According to Diabetes Australia, an estimated 1.2million Australians are diagnosed with diabetes, and another 2 million with pre-diabetes. People with diabetes or at risk of diabetes are more likely to develop other chronic health problems such as cardiovascular disease, stroke, and hypertension, and have a higher risk of dying prematurely.

The study team found that a single 50 milliliter dose (about 2 ½ tablespoons) of extra virgin olive oil, blended in a yogurt smoothie, led to improved endothelial function two hours after ingestion, while the refined oil did not.   Endothelial function and blood pressure were measured before the meal, and two hours later. Endothelial function is a measure of blood vessel elasticity and how well blood vessels expand as blood flows through them, and is considered an independent predictor for risk of future cardiovascular events.

The difference between the olive oils was statistically and clinically significant. No short-term effect on blood pressure was found with either type of olive oil.

“While research over the past few years has shown that olive oil can offer considerable benefits to heart health, results of those studies have not always been consistent. This may be due to the fact that the nutritional content of olive oil varies. For example, all olive oils are relatively high in monounsaturated fat, which is thought to be “heart-healthy,” but extra virgin olive oil contains higher levels of biophenols, natural compounds that modulate oxidative stress, and thought to slow the progression of cardiovascular disease.”

“There is tremendous interest in, and lively debate about, the health effects of oils, including olive oil.  Such debates should be resolved with data, and this study makes an important contribution by highlighting the relevance of not just the type of oil, but also its quality.  We have added to an impressive weight of evidence indicating diverse health benefits from genuine extra virgin olive oil.”

Dr. Njike emphasized the need for a larger study with a longer time frame to add to the findings of this study, as well as studies to help clarify how extra virgin olive oil influences cardiovascular health.