14 athletes across 11 different sports have been selected as ambassadors for this year’s Share a Yarn Program. As part of the program, First Nations and non-Indigenous athletes are chosen as ambassadors to undertake cultural training and activities side-by-side, supporting each other to foster reconciliation and improve cultural competency within their own sports. 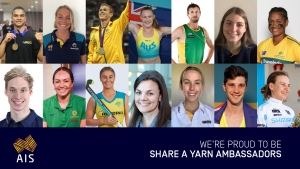 Australian Matildas football representative Kyah Simon recalls playing at the 2015 FIFA World Cup and locating her family in the stands by looking for the Aboriginal flag.

Softballer Janice Blackman, from Queensland’s Mount Isa, speaks emotionally about presenting her Australian Olympic teammates with an Indigenous-designed training jersey, a moment she says made her “feel at home”.

These are some of the personal stories Olympic, Paralympic and Commonwealth Games athletes are already starting to highlight as part of the 2021 AIS Share a Yarn program, launched today to build more meaningful connections between sport and Aboriginal and Torres Strait Islander cultures.

Fourteen athletes across 11 different sports have been selected as ambassadors for this year’s Share a Yarn Program. As part of the program, First Nations and non-Indigenous athletes are chosen as ambassadors to undertake cultural training and activities side-by-side, supporting each other to foster reconciliation and improve cultural competency within their own sports.

Kyah Simon, from Anaiwan and Biripi heritage, was inspired to pursue sport after watching Cathy Freeman’s 2000 Olympic gold medal race and she equally wants to inspire a new generation of young Australian girls.

Simon, the first Australian Indigenous player to score a goal in a FIFA World Cup, said:

“As a nine-year-old in my home family lounge-room, that was a real moment that sparked the fire in my belly to want to emulate as much – or half as much – as what she’d done. Every time I wear the green and gold I’m thinking of my culture and my people and the thousands of Aboriginal girls that might be watching that and need a moment of inspiration.”

The Australian women’s softball team has been at the AIS on a pre-Olympic camp and as part of Share a Yarn activities Janice Blackman invited her teammates to be part of a Walk on Country, on traditional Ngunnawal land. Blackman is one of three Aboriginal players in the Australian Softball team and spoke of the powerful moment the team asked them to present an Indigenous-designed jersey to their teammates.

Janice, from the Gubbi Gubbi and Badtjala Tribes, in the Sunshine Coast region of Queensland, said:

“It’s a really awful feeling when you feel out of place in your own country, but when you’re essentially playing for your country. Presenting those jerseys] is probably the best feeling I’ve ever had being in this team. I know the girls probably think it’s something very small, but to me it’s massive … I feel just so settled, so free and I just feel like I belong.”

Gabrielle Coffey grew up in Darwin and Alice Springs, but moved to Melbourne to pursue netball. She still feels a wonderful connection to the traditional lands of her Wiradjuri people, and studies Indigenous studies and politics.

“My fondest memories as a kid were when my mum, who was a nurse, would take me and my little sister out to the communities.  Mum used to go out teaching the kids and families about washing their faces to prevent and treat trachoma, an eye infection that can lead to blindness. Australia is the only first world country to have it. Mum and the nurses used to practise lifting up the eyelids of me and my sister too”.

“We’d drive up to four hours to communities with no street lights or running water, but that was life as we knew it. We’d have fun playing with the kids on the ovals and the red dirt. They knew how to live off the land, to hunt and gather. I remember once they’d rescued a baby joey and we bottle-fed it for two days.”

Alex Winwood is a proud Noongar man, living and training in Perth. He has qualified for his Olympic debut in boxing at Tokyo later this year. His grandfather, Primus Ugle, was a celebrated Aboriginal painter with works featured in the National Art Gallery.

“My pop owned an Indigenous art gallery so I’ve done a lot of traditional dance and things like that, but living in Perth is different to how others live in the country and stories have been lost, I’m more than proud to represent Australia and my Indigenous heritage, there shouldn’t be a divide between the two. We should make each other stronger.”

Commonwealth Games Gold medallist and beach volleyball representative Chris McHugh, from Adelaide, is honoured to be among the non-Indigenous athletes invited to participate in the AIS Share a Yarn program.

“I have a young son, Jack, now 18 months old and I’ve been thinking about whether some of the young Indigenous kids have the same opportunities he will have. The age expectancy gap is still so big, which is astonishing when you consider we are a first world nation.”

“So Share a Yarn for me will be about trying to challenge the thinking and perceptions within my own sphere of influence. For some of us in Olympic and Commonwealth Games sports, the spotlight may shine on us every two or four years and that gives us a voice, so we can use that voice to promote Reconciliation and move our country forward. I’ve been representing Australia for 14 years and every time I step on the court I’m going out representing all Australians.”

AIS Director of People Development and Wellbeing Matti Clements said Share a Yarn was about creating greater inclusivity and understanding, in sport and Australian.

“Understanding different cultures in the community helps athletes to overcome and prevent racial divisions in sport.  Share a Yarn is about encouraging collaborative, respectful and honest communication between participants. It’s about building trust, fostering accountability and providing a safe place to listen and learn. We want these athletes to be role models for cultural understanding and inclusivity within their communities, which will ultimately lead to a greater sporting experience and life experiences for all.”

Genesis Health and Fitness Outlook for 2021